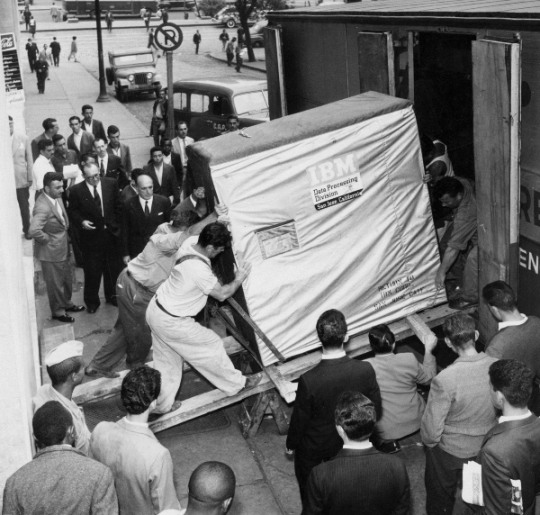 Big data has been around as long as data.

Think about it for a minute.

When man built the first computing machines that produced output, we had to invent some way to store the output. Magnetic tape was an early solution and as our data appetite grew, so did our innovation into to shrinking the footprint of our data hoarding ways. Take this iconic computing image, for example: Yes, that’s right, 5 MB. As in your Apple Watch has 3,200 times more memory and it fits on your wrist. But this is not my point. My point is that we’ve been collecting a lot of data output over the years. In 2010, Google’s CEO, Eric Schmidt stated that earthlings create as much data every two days as we had created cumulatively from the beginning of time up until 2003. And that has only accelerated in the decade since Schmidt made that statement.

And we’re doing some amazing things with that data. Netflix figured out how to produce television that people would watch; Target knows to send you emails and coupons for child berthing before you know you’re pregnant; and Facebook shows your mom ads for products they know she’ll buy.

However, for every great big data success story, there is a heaping pile of failures. Some failures are projects that cost a lot of time and money and produce no results… let’s set those aside and instead focus on an example of how big data can steer you wrong.

Let’s look at Busch Gardens in Tampa, Florida. My family has season passes to the park as it’s only 20 minutes from our home in Tampa and we have a four-year-old boy. We typically go on Sunday mornings for a few hours, especially off peak weekends. We’ve mastered avoiding crowds. But, I’m probably not a good customer and it’s because of big data. Actually, I don’t particularly like Busch Gardens or think they do a good job; but my son has fun for a couple hours, and that’s priceless. I get 10,000 steps by noon, so it works for me. You see, I bring my own food and drink. The only things I buy each visit are a refill of my season pass holder’s Icee cup (99 cents) and a refill of my season pass holder’s popcorn bin (99 cents). I don’t buy souvenirs or play the midway games. That’s it. I bring my own snacks and drinks for two reasons:

But what is missing here is that Busch might be making decisions based on park traffic flow and behavioral data sets. They are not factoring in the human element – customer service and satisfaction. I think the elasticity of a park goer’s return is pretty high – in that it would take a lot for a pass holder to not return again; after all, they’ve already paid the fee. Even the single day goers have paid the fee already. Busch’s customer service is really failing here. To protect margin, they are serving crappy food, if any at all. In the end, they annoy a few customers and lose a few bucks, so it’s no big deal. And the output the analysts see is improved margin. Sure, they can see comments on Facebook, etc… but until there’s really a concerted effort, I don’t see Busch making progress when profits are up. When profits go down, if they rely too heavily on the data, it will compound the decline. So they are damned in both situations until they take a more customer-centric approach.

My solution for Busch is to actually farm out food operations to local eateries that are popular in Tampa, enabling them to open stands at Busch, mark up their food to theme-park levels, and then Busch gets a cut. Busch can eliminate a lot of headcount and operational headaches while support local business. For example, Wrights Gourmet, PDQ, Ichicoro, Holy Hog, etc… I think they’d sell more food with a lot less effort – and make customers much happier.